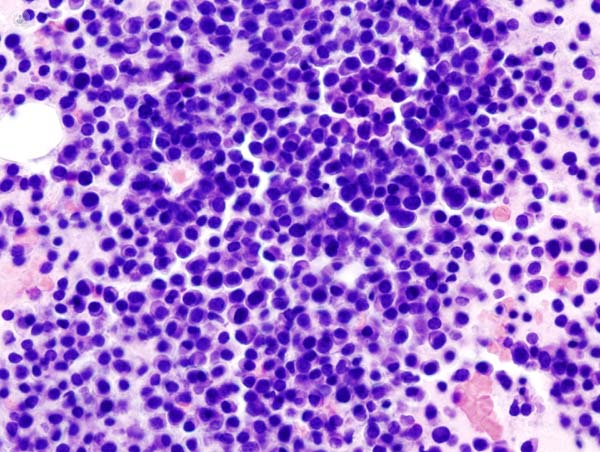 What is multiple myeloma?

Multiple myeloma is a type of cancer that affects plasma cells, a type of white blood cell responsible for producing large volumes of antibodies to fight infections. Myeloma starts with a malignant plasma cell in the bone marrow (the spongy centre of bones where blood cells are produced from the body’s natural stem cells).

The cancer divides and multiplies until it crowds out the healthy blood cells. It produces abnormal proteins instead of antibodies, which cause complications and leave the patient more vulnerable to infection.

It is known as multiple myeloma because the cancer frequently affects multiple parts of the body, for example, the spine, skull, ribs and pelvis.

What are the symptoms of multiple myeloma?

The main symptom of multiple myeloma is bone pain, most commonly in the spine and ribs. Other symptoms include:

It is not clear what causes multiple myeloma; however, several risk factors have been identified:

Can it be prevented?

There is no way to prevent multiple myeloma, but the earlier it is detected, the most effectively it can be treated. It is recommended that patients with MGUS have regular screenings for multiple myeloma for this reason.

What is the treatment for multiple myeloma?

Most cases of multiple myeloma can’t be cured; however research is ongoing to find new treatments. Current treatments can help to control the condition and manage the symptoms.

Any cookies that may not be particularly necessary for the website to function and is used specifically to collect user personal data via analytics, ads, other embedded contents are termed as non-necessary cookies. It is mandatory to procure user consent prior to running these cookies on your website.